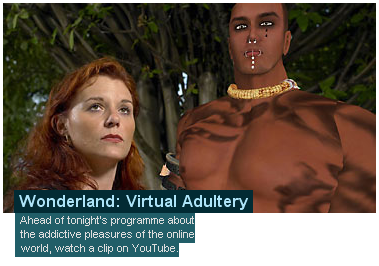 If only I were in the UK tonight… Soon to BBC Two. This new series delves into some of the stranger and more extraordinary corners of ordinary life.

The BBC documentary I was part of last year finally aired tonight on BBC2. Of course, the title sounds a bit dicey, but it actually follows 2 couples, the one I was involved with the story line of were not the spotlighted one on the listing, but rather the story of Nik and Kira (their SL av names) who I presided over the virtual wedding ceremony of. I got to play virtual justice of the peace and marry them within Second Life.

Due to being on the Sex & Relationships panel at SLCC 2006, I have been contacted occasionally on my thoughts and perspective on the virtual romance and dating scene within the virtual world of Second Life (salon.com article, Science and Sex article). It all starts with owning a virtual cathedral and playing host to numerous weddings in SL over the last 3 years. A BBC representative for the documentary called me early on to have me help guide them through the space, understand what relationships were like in SL and recommend some possible couples to highlight in their filming.

After a few months I was contacted again and asked to perform a ceremony for one of the couples to be part of the documentary, Nik & Kira. They were both huge Duran Duran fans who had met in SL when it was rumored that the band was to play at RiverRunRed’s sim Avalon. The band never ended up playing in world, but a solid Duran Duran fan community built up over time. Nik & Kira were friends initially and then that gradually changed to romance and then to gaining up the courage to meet in RL and at the time of the documentary had gotten to the stage of living together.

I had the pleasure of getting to know them during the filming process. With their input I planned and wrote up the ceremony script and got my good friend Nethermind Bliss, with the help of Phreak Radio, to host the audio stream and record the raw audio files. We even had a rehearsal to not only walk through the ceremony in SL but to make sure all of our various tech was working; I had Nik @ Kira on Skype and was broadcasting to Phreak’s audio server, while Nethermind monitored. It all went amazingly well.

The day of the actual SL wedding filming I was traveling in New York city for the http://www.virtualive.tv project that I was a part of. From the bedroom of my friend[‘s apartment, I played broadcaster, wedding officiator and part of the documentary production. It wasn’t a closed set in Second Life and all of Nik & Kira’s virtual friends and even some RL family were in attendance. There were camera’s set up in real life at their respective houses and aside from having to do some multiple takes it all went well. We even had a rocking reception that Nethermind DJ’d which of course spotlighted lots of Duran Duran music.

The BBC took all of the live video footage shot of Nik & Kira while on SL, all the in world machinima and the audio we had captured of the ceremony itself and incorporated it into the documentary. Was a wonderful experience, the producer even sent Nethermind and myself flowers (in real life) to thank us for our efforts.

If anyone caught a glimpse of it, would be curious to see how it all came out.

The BBC’s press release on the show.

Some of the forum chat on the show on SLuniverse.

Might be viewable if you are in the UK: